Tweet
The purpose of pickling is to prevent food spoilage caused by disease-causing microorganisms mostly found in raw foods. These microorganisms do not thrive in acidic or salty foods. 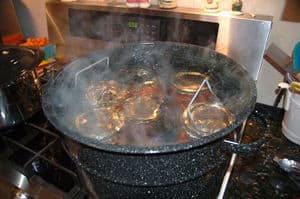 Pickling usually works by using high quality ingredients and following the correct pickling storage methods. Sometimes, pickling requires proper heat processing to ensure safe and edible pickled foods that can be enjoyed for a long time. This includes boiling as it distributes heat to all parts of the food before preserving and storing them.

Sometimes botulism, a type of food poisoning, occurs in canned pickled foods that have less acidification. That's why the pickling process either contains a salt or vinegar solution, not only to preserve foods but to enable pickling safety as well.

Pickling safety concerns generally pertain to proper pickling storage methods. As a rule, the same steps are followed even if the pickling methods differ.

Precise food handling and sanitation are important in ensuring pickling safety. Heating ingredients together such as salt, vinegar, choice of vegetables, and spices is the first step to destroying bacteria.

Next, place the ingredients carefully into sanitized containers to be pickled. Pour over the brine or vinegar solution, put the lid on tight, and store them in a clean, dry, and dark place such as the kitchen cupboard. The acidity of the vinegar is imperative to inhibit toxin production and botulism growth.

The lactic fermentation process aids in building a burgeoning community of beneficial microorganisms that act as natural defense against unsafe toxins and bacteria. Healthy lactic fermented bacteria produce generous amounts of lactic acid that is essential in the destruction of botulism.

According to the U.S. Department of Agriculture, lactic fermented vegetables are safer to eat than having them raw. Raw vegetables can be exposed to pathogens, which is the source of bacterial infections. It has been claimed that fermented pickles submerged in a salt brine have no safety concerns. Lactic acid bacteria are the best exterminating agents against bad bacteria.

Other factors that might affect lactic fermentation safety include the kind of salt used, the acidity level used, and the temperature set during fermentation. Pickling salt is a specialized kind of salt devoid of iodine and exclusively used for pickling vegetables. Also, if the acidity levels of the fermented foods reach a pH below 4.4, then it is conceded as a safe product. For the temperature, most lactic fermented pickles are ideally made between 59°F / 15°C to 77°F / 25°C.

Canning involves the use of boiling-water canners or regular jars with self-sealing lids held by bands. The bands act as lid holders when the jars are processed and cooled. Steer clear of containers that are made of materials that react to salt and acid such as brass, copper or iron. Large jars are also not advisable when it comes to home canning.

Commercially-made canned products have been monitored for botulism and are processed to meet safety consumer standards. However, in home canning, there is no assurance. Botulism outbreaks can ensue whenever there is low acidity. You should boil the home-canned foods in high temperature for 20 minutes before consumption.

Check the jars or cans for rust and cracks and discard the damaged ones. Wash the jars and rinse them thoroughly. After washing, keep them hot in a basin of scalding hot water or in a hot dishwasher. Leave them until they are ready for use. This proper sanitation reduces potential contamination and food-borne illnesses.

Some pickle recipes can be kept in the fridge for about a month at 40°F / 4°C or colder, providing they have sufficient vinegar concentration (about five percent acidity). Diluting the acidity may result in unsafe pickles where bacteria may breed. Cucumber pickle slices taste particularly crisp when they are chilled.