Tweet
Pickling is an age-old preservation process that extends a food's shelf life. Many vegetables are good candidates for pickling and the most popular in the United States is the cucumber. 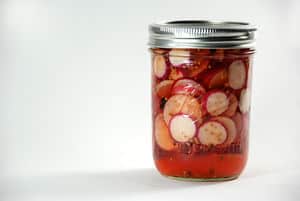 When a food goes through the pickling process, the outcome is called a pickle which is originated from the Dutch word "pekel". Pekel means brine, a salt and water solution often used in preserving and drying foods.

About 4,000 years ago, pickling cucumbers were introduced in India. Termed "achar", it was used to preserve foods for future consumption and long sea voyages. Travelers would only return home after months or years of sailing and traveling. That's why preserving food became such a necessity.

Pickling also aided empty stomachs during frosty winters and parched seasons. While pickling was intended for the preservation of foods, pickled vegetables and meats were also eaten and enjoyed due to the unique flavors introduced in the pickling process.

Pickles were also viewed as healthy snacks since fermentation generates the good kind of bacteria that control intestinal microorganisms.

During ancient times, people experimented with different ways on how to preserve their foods. Pickling became a requirement in times of dire need such as famine and long cold seasons of the year. Long ago, travelers have a need to secure food supplies for long periods of travelling time.

Not just in India, workers in China and soldiers in Rome have adopted the pickling method to sustain their health. Cucumbers helped in the quick healing of their injuries and fatigue. Aside from cucumber, cabbage and dill were also pickled and conserved for the long haul.

People pickled their foods not only to simply preserve them. Pickling comes in a variety of flavors by using different kinds of foods and interesting pickling mixes and spices. In fact, the development of pickled foods in various cultures has enriched distinctive food preferences resulting in acidic, sweet, and piquant flavors.

How People Used to Pickle Food

Ages ago, there was no refrigeration to preserve foods. People in those days rely on other food storage systems to have their foods last for longer periods. Some food products were dried and kept in tightly sealed pots to keep pests away.

Usually, vegetables were pickled in salt, vinegar, certain oils like olive oil, sugar, and rosemary extracts. These ingredients help in the augmentation of flavors while adding edibility and providing an aromatic essence to eliminate rancidity to their pickled foods.

People also used alcohol in pickling as a substitute for acid ingredients.
Tweet